Today I Loaded My Kindle With…

A couple of dystopian fantasies, a steampunk magazine, two writing guides and an autobiography/recipe book of an Irish chef. I also found two Top Sights city guides I hadn’t listed before, Moscow and Malmö.

While I lived in Denmark, I only visited two cities in Sweden, Göteborg and Malmö. I still kick myself for missing out on Stockholm. Which is not to say that Göteborg and Malmö weren’t worth visiting! I had an awesome time in both cities. Göteborg has lovely canals and interesting, historic buildings, but what’s not to be missed is the scenic archipelago, which can be reached by ferry. Malmö is an easy train ride from Copenhagen and has a very nice pedestrian street with lots of shops and restaurants.

It was in these cities that I came to know of and appreciate a Swedish institution, fika. Fika is a generic term for an afternoon coffee break. Coffee is usually accompanied by something sweet and absolutely delicious. This is one of my favorite things in the whole world, so I was delighted to discover that the Swedes had a word for it. 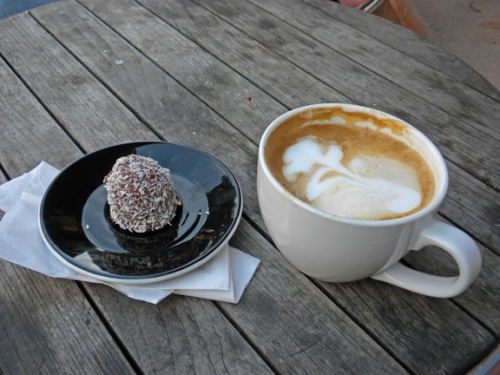 Coffee and a kakaoboll in Göteborg.

Just found out they sell kakaobolls at Ikea. You gotta try them. They are awesome!

On to today’s freebies!

The Pearl Savage by Tamara Rose Blodgett
Seventeen-year old princess, Clara Williamson, lives an old-fashioned existence in a biosphere of the future. When her sadistic mother, Queen Ada, betroths her to an abusive prince of a neighboring sphere, Clara determines to escape Outside where savages roam free. Clara escapes tyranny only to discover the savages are not the only people who survived the cataclysmic events of one hundred forty years prior. Once Outside, Clara finds herself trapped, unable to return to the abusive life of the sphere while facing certain danger Outside.

A Mischief in the Woodwork by Harper Alexander
A generation ago, something began to fail in the foundations of our country. Devoid of a culprit, our cities began to crumble, becoming a derangement of ruin and decay. No one could put a name to what began to happen in the nation, that day, and thus was born the term ‘mischief’ for the dark things that began to creep through the woodwork. I, Avante, am a slave of this dark time. But for all its terrors, it’s a good time to be a slave. The Masters, fragile and loathe to be surrounded by anything crude or horrific, have retreated upstairs, and locked themselves away. They don’t come out. As such, we’re as good as free, now. Free to take the ruined land for ourselves. The only pitfall, really, is the challenge of surviving in such a forsaken place.

FlagShip Steampunk Special Issue
FlagShip invites you to Launch into Imagination with this special Steampunk issue. Our stories this month include:
Firebrand, by Doug Souza
Pressed into service on one of Britain’s airships, two boys seek their freedom.
Rats to Ruins, by Michell Plested
The town had plenty of rats, that was true. And the troupe knew how to get rid of those. Well, the non-human ones, at least…
Boys will be Boys, by Philip Carroll
Turning lead int gold should have been a simple alchemical task, the boys thought. Dad just wasn’t using enough phlogiston. Never mind the explosive side-effects…

Inspire Me To Get Writing by Carla Acheson
An essential writing guide packed with inspiration, motivation, tips, ideas, techniques, creative writing examples, exercises and original short story prompts. It is everything you need to become inspired and begin your journey into writing for profit or pleasure.

365 Things I Learned the Hard Way (So You Don’t Have To) by The Digital Writer
This book is for writers: authors, freelancers, and content marketers. This book is for YOU. Anyone who wants to make their living with words online, from freelancing to self-publishing, to running a blog built around quality content that will facilitate the sale of information products or services, this book will get you where you’re going far faster, and without all the heartache.

Cheffin’ by Brendan Cronin
Master Chef Brendan Cronin – the only Irish chef to attain the prestigious Swiss culinary title of ‘Chef de Cuisine Diplomé’, Swiss Master Chef – takes us on a global journey of gastronomic delight from his childhood on a small dairy farm in the West of Ireland, to cooking in great hotels in Limerick, Dublin and onward to the beckoning and beautiful Swiss Alps, Africa, and The Far East. We follow Brendan as he pursues his dream of becoming a skilled and accomplished chef while working for some of the best hotels in the world. Along the way, Cronin describes the hospitality industry like the true professional he is, telling his story with passion, humor, and Irish wit – making us so hungry you will want to stop mid-chapter to try the many recipes included in this book.

Descriptions and images provided by Amazon

I found these books via Amazon’s Kindle eBooks store. Resources for free Kindle and other format eBooks are listed in my sidebar.

These freebies are limited time offers, so there is no guarantee any of these books will still be free when you click on the links. Grab them sooner rather than later.

Books that I have previously listed will occasionally come up free again. I add those to my current list for people who didn’t see them the first time.