This past weekend I went to a Shut Up and Write marathon at a cafe in downtown San Francisco. Try as I might to do just that, it was hard to concentrate when history was happening right outside the door. Finally, I packed it in and followed the rainbow clad crowd to the Pride celebration happening down the street. 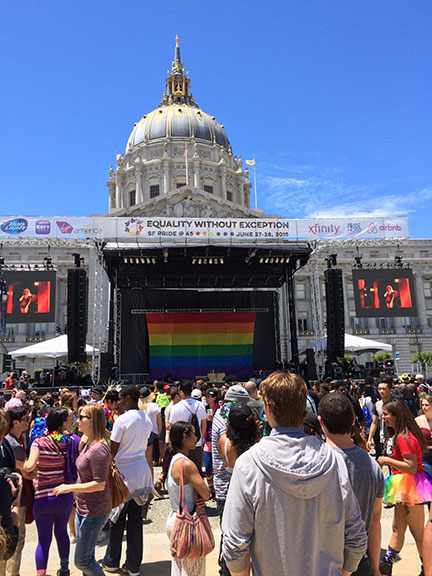 It’s always a festive crowd, but this year it was even more so. There was so much happiness in the air over this great victory for human rights. People were literally jumping for joy!

That’s Cheer SF performing at the festival. People were hopping all over the place, having a great time. I did, too, until my computer started feeling heavy on my back and I headed home.

Later, when I got online, I noticed some interesting problems mentioned in several writing forums. One person asked, what should writers do if their contemporary WIP concerns a gay couple who can’t get married, since now they can? Another wondered if prejudice against LGBTQ people is an issue any more.

Of course, this sparked some interesting debate. For the first topic, it was mostly suggested to set the story a few years ago or deal with what history has handed you. For the second topic, the original poster was reminded that the SCOTUS ruling was 5 to 4 and prejudice sadly remains an issue.

When writing contemporary fiction, history can indeed hand you a whopper. Consider this scenario: you spend years working on your saga of espionage along the Korean border. Then, boom! Kim Jong-un is assassinated, and the north and south are reunified. Sound farfetched? So did the fall of the Berlin Wall, but it happened. Authors of Cold War spy fiction probably had to rethink their entire careers.

History happens and when it does, don’t panic! Instead, see it as an opportunity to make your story even more relevant.