Convention season is upon us and I hope all my fellow geeks out there have at least one fun con in which to romp. I am geeking out in a major way, spending two consecutive weekends at three conventions.

Over the Memorial Day holiday weekend, I headed to San Jose for the joint conventions, Fanime and Clockwork Alchemy. I have to shout this out to San Francisco Bay Area folks who aren’t in the know. For a $50 preregistration fee, you can spend four days at two conventions. It’s an incredible value and tons of fun.

Fanime is all things anime and manga, as well as a bit of Asian cinema thrown in. The attendees love to cosplay, i.e., dress in the costumes of their favorite characters. It’s like a four-day costume party that goes all day and all night. Just so you know, this is a very young crowd and the majority tends to be in their teen and twenties.

There’s a lot going on: video rooms, panel discussions, live bands, karaoke, swap meets and a 24-hour game room. There is a large dealers’ room where you can buy all kinds of anime-related paraphernalia. This year, the Artists’ Alley was enormous. This is where you can buy creative pieces by talented fan artists.

In the dealers’ room with a Cthulhu plushie. Who knew an elder god could be so huggable? (Photo credit: Teacher Jennifer)

Clockwork Alchemy is all things steampunk. If you love Tesla and Jules Verne, this is where you want to be. The crowd is more mixed, with younger and middle-aged folks mingling equally. If you like the technical and/or historical side of the genre, there were plenty of informative panels as well as an art gallery and hands-on exhibit. There was an authors’ salon where writers could attend panels hosted by published genre authors. The convention also included a dealers’ room, a martial arts studio, dance lessons and three nights of live performances.

Steampunk fans love to cosplay, too. I got into the spirit and put on some steamy duds. Huge dioramas were placed around the con for posing purposes.

Oh the humanity! I watch in thrilled horror as zeppelins battle above me. Photo credit: hostess with the mostest Susan.

This coming weekend, I will be attending Denver’s Comic Con. Can’t wait for that, though I’m glad I have a few days to rest up before I get my con on again.

Does this all look and sound like a lot of fun? Well, it is! And you can do it, too. Check out this website, Upcoming Cons, for current information on upcoming conventions.

I’ve got to shout-out this show because it’s awesome. 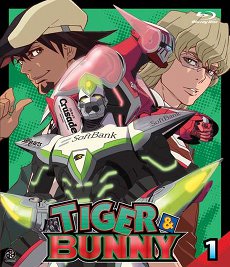 While at Fanime last month, I discovered a new-to-me superhero show called, “Tiger & Bunny.” Yes, it is a ridiculous name, but it’s fitting. The show tells the story of heroes, known as Next, who fight crime while being televised live. Each hero has corporate sponsors they must answer to. Tiger is an old school hero who rescues victims regardless of consequences. Barnaby is his new partner, a younger hero very attached to his corporate image. Tiger gives him the nickname, Bunny, though it’s not out of fondness, at least, not at first. It’s no spoiler to say this is the beginning of a great bromance.

This isn’t a children’s anime and has more mature themes. It’s great for teens and adults who enjoyed shows like “Cowboy Beebop” and “Trigun.” You can watch the entire subtitled series on Hulu with a paid subscription.

Or How I Spent My Memorial Day Weekend

I have attended Fanime, an anime convention in San Jose, California, almost every Memorial Day weekend for the past 12 years. Why would I do such a thing? Because it’s fun! It’s like being in the middle of a huge costume party that runs nonstop for four days. And I like anime, so going to the convention helps me keep up with what’s new and exciting.

This year, I found a new anime to watch called “Tiger and Bunny.” I know. Sounds like something fluffy and light, but it’s actually a superhero story, and it looks pretty good. I  found a beautiful online manga called “Knite.” Can’t wait to see more of that. And I watched a touching movie called, “Sunny,” about seven Koren schoolgirls and the women they become.

In-between, I strolled Artists’ Alley, where talented artists sell their work. Some of the art is specific to a particular fandom, while other artists sell their own work, usually drawn in the style of manga, Japanese comics. I also spent some time at Clockwork Alchemy, the steampunk sister convention to Fanime. One ticket got you into both conventions, with free shuttles running between both venues 24 hours a day. Sweet.

A special shout-out goes to my friend, Jennifer, who attends this glorious geekfest with me every year. We do have fun.

Do I dress up? Not really. Not unless you count wearing cat ears and a Sherlock T-shirt as dressing up (I don’t.) However, I love seeing the people who cosplay (i.e., wear costumes.) Most people make their own costumes and they are incredibly creative. Think about it. They don’t have patterns. They are making costumes based on reading a comic or watching an animation.That can’t be easy.

The front of the convention center was packed from morning to evening with cosplayers posing for photos. It’s a lot of fun to take pictures. Above are some of my favorite photos from this year’s convention.

Next year, where will I geek out: Fanime or Eurovision? San Jose or Stockholm? It’s a big decision. We’ll see which one I choose.