I live in Millbrae, California, a small suburb about 10 miles south of San Francisco. It’s got a nice shopping area in easy walking distance from my house. Every now and then, I will walk past some random item that has been abandoned on the sidewalk. After I walk by, I always think, “I should take a picture of that.” Last night, I finally did because this piece was truly random. 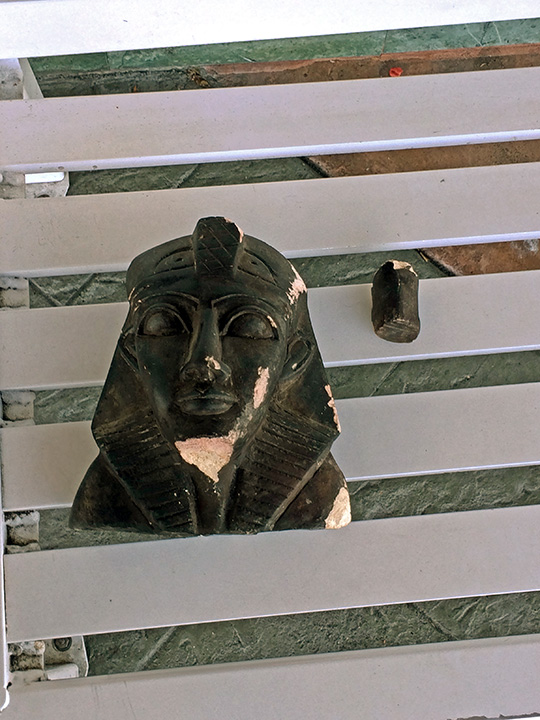 This unlucky pharaoh was left on the bench outside the Kohl’s that closed about a year ago. He’s had a rough time of it, but whoever abandoned him thoughtfully placed him face up and left a portion of his broken beard beside him.

It’s such a “Wait. What?” moment when you pass by something like this. There’s no store nearby that sells such items, so it had to be carried there, but why? Plot bunnies hop around items like this, wanting to take you down the rabbit holes of possibilities.

Is Broken Pharaoh’s appearance on a suburban mall bench mysterious or mundane? The great thing about random items is, it’s all up to you.

A plot bunny is wonderful yet nefarious creature. It will hop into your brain and take your creative process on journeys that are amazing and/or terrifying. A plot bunny can also take you on a journey that leads to a dead end, and then turn around, smirk and say, “Yeah, that’s all I got.”

What is a plot bunny? It’s a story or plot idea that gnaws at your brain, demanding to be written down.  It can start out like Alice’s White Rabbit, but end up like Donnie Darko’s Frank. The concept inspired me to create this gif.

During the rest of the year, it’s pretty much fine to let the plot bunnies roam free. During NaNoWriMo, though, they can lead you astray to the point of becoming discouraged and dropping your story. Don’t let this happen!

During October, write down your novel ideas. Let one idea lead to another. If a plot bunny pops up and beckons you down its hole, chase after it and see where it leads. Be inspired by the bunny, but take control if the idea is going nowhere.

Of course, during NaNoWriMo, plot bunnies will persistently pop up. You don’t have to ignore them. A big part of NaNoWriMo is allowing your creativity to flow freely without critical restraint. Here’s what to do if a persistent bunny starts to nibble at your story.

Let’s say you’re writing a novel about vampires vs. fairies set in Santa Fe, New Mexico. Your main character is half-human, half-fairy and lives in an apartment building. A new neighbor moves in next door. For the purposes of the story, this neighbor should be a vampire or fairy. But, a plot bunny hops in and says, “Hey! The new neighbor is a professional chef and serial killer who uses poison on his victims.”

Follow that bunny. It could lead to an interesting plot twist and get your creative juices flowing. However, if the bunny leads nowhere, all you have to do it stop and go back. Don’t delete those words. Grey them out. The idea could still be useful. Go back and make the neighbor a fairy. Doesn’t work? Make the neighbor a vampire… a vampire chef who puts drugs in the food of his intended victims to knock them out. See, that bunny was useful after all.

You can read more about plot bunnies, including the different breed, in this amusing article on Wikiwrimo: Plot Bunny.