One of the hottest tickets in the world right now is Hamlet, starring Benedict Cumberbatch, at the Barbican Theatre in London. I wanted to see it so much, I thought about traveling there, but aside from the cost, the tickets sold out long ago.

Then a friend invited me to see Hamlet, starring Benedict Cumberbatch, live at our local San Franicsco Bay Area movie theater. No joke! On October 15, the stage production was broadcast, live and delayed, to theaters all over the world. 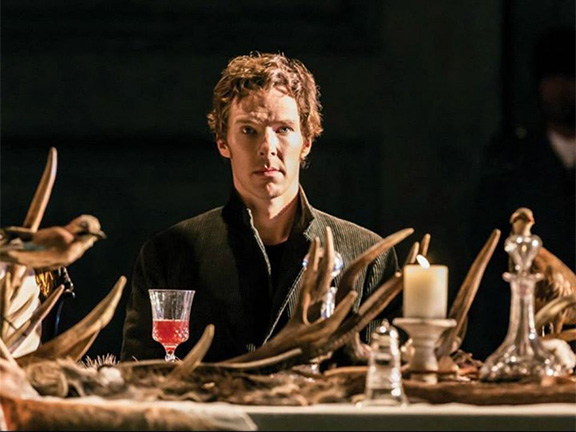 Benedict Cumberbatch was brilliant as Hamlet: moody, mercurial, brooding and funny. He throws himself into the character and the play, and the takes the audience on a wild, energetic ride. He’s an active Hamlet who can’t sit still even as he chides himself over his own inaction.

The setting of the play is timey-wimey, half-contemporary and half-vintage. The costumes and the sets were disjointed, but so is Hamlet’s mind, so it worked. The rest of the cast contained an admirable assortment of actors who were up to the task of performing with a world famous celebrity.

It was an amazing experience, but what was even more amazing is that our theater was only half full. I don’t think this was due to lack of interest in Shakespeare. I wouldn’t have known about this showing if my friend hadn’t told me. There were no advertisements or trailers in movie theaters that I saw. Nothing on social media caught my eye. My friend happened to belong to a mailing list and got the notice.

I’m certain our theater and theaters all over the U.S. would have sold out if the showing had had some advertising. I feel bad for people who missed it.

But never fear! Encore performances of Hamlet will be shown in local U.S. movie theaters soon, via National Theatre Live, an organization that brings live stage plays to movie theaters worldwide. They have a mailing list, which I’ve subscribed to now. No more missing out on great theater, like Coriolanus, starring Tom Hiddleston, which had been previously broadcast live.

Here’s where you can find encore performance information for Hamlet. If you love Hamlet or Benedict Cumberbatch, or both, this is not to be missed.

So, maybe you’re thinking “I’d really like to participate in NaNoWriMo this year, but I don’t have a clue what to write.”

The solution is surprisingly simple. You don’t have to pull a story out of thin air. Consider these sources of endless inspiration: fairy tales, Shakespeare, pastiche and fan fiction.

Putting a modern twist on a classic fairy tale is a great way to use an existing plot and characters to tell a fresh story. The popularity of television’s “Once Upon a Time” and “Grimm” attests to a wide audience eager for these stories.

The same is true for Shakespeare’s plays. For example, the movie, “10 Things I Hate About You” is a retelling of “The Taming of the Shrew.” The musical “West Side Story” replaces Verona with New York City and places Romeo and Juliet in rival gangs.

If fairy tales and the Bard don’t appeal to you, consider writing pastiche from public domain works. “Pride and Prejudice,” “Dracula” and Sherlock Holmes have been adapted countless times in a wide variety of genres and media. For that reason, you might want to find a less familiar, but equally powerful story to adapt. For example, the TV series “Revenge” is based on “The Count of Monte Cristo.”

Still not inspired? You may want to try your hand at fan fiction. This can be especially helpful for new writers. Working with familiar characters can help spread your wings and inspire you to create your own characters and situations. While you can’t legally publish this work or be paid for it, you can post it to fan fiction websites, where readers are eager for novel length works.

You can rewrite stories to fit almost any genre. “Something Rotten” by Alan M. Gratz turns “Hamlet” into a modern murder mystery set in the town of Denmark, Tennessee. “Cinder” by Marissa Meyer is a science fiction retelling of “Cinderella.”

Find a story or play that strongly appeals to you. This is key. You won’t sustain enough creative energy to write a novel if the original story doesn’t excite and engage you.

I love a good, witty battle of the sexes, so it’s no surprise that “Taming of the Shrew” is one of my favorite Shakespeare plays. However, I’ve never been too keen on how tame Kate became at the end of the play. It’s one reason why I love the movie version with Elizabeth Taylor and Richard Burton. If you think Kate is tamed by the end of the film, you and Petruchio have another thing coming.

While poking around the World Literature section of Amazon Kindle books, I found a play, “The Shrew Untamed.” It’s a sequel to Shakespeare’s play with a feisty Kate being her true self once again. Instant click.

I also grabbed a fantasy book in the fairy genre, set in contemporary Scotland. Love this kind of stuff. If you do, too, grab it while it’s still free.

The Shrew Untamed by James Carter
Kate marries Petruchio in a state of submission, only to turn the tables on her husband and family with devilish brilliance. A sexy update to “The Taming of the Shrew” that is designed for 21st century audiences.

Blood Faerie by India Drummond
Unjustly sentenced to death, Eilidh ran–away from faerie lands, to the streets of Perth, Scotland. Just as she has grown accustomed to exile, local police discover a mutilated body outside the abandoned church where she lives. Recognising the murder as the work of one of her own kind, Eilidh must choose: flee, or learn to tap into the forbidden magic that cost her everything.

I found these books via Amazon’s Kindle eBooks store. Resources for free Kindle and other format eBooks are listed in my sidebar.

These freebies are limited time offers, so there is no guarantee any of these books will still be free when you click on the links. Grab them sooner rather than later.

Books that I have previously listed will occasionally come up free again. I add those to my current posts for people who didn’t see them the first time.